I am pleased to be reviewing portfolios, lecturing and jurying alongside Cig Harvey and Ann Jastrab in Greenwood, SC in October 2010 for Click646. This is the second year of the festival which will feature the work of Ben Ham and the work of many students and professors from South Carolina colleges and universities. If you would like to have your work reviewed, contact Jon Holloway as soon as possible as the reviews are first come, first serve and are only $25. You will get twenty minutes with Cig Harvey, Ann Jastrab, or myself.

Here is more info from the press release. 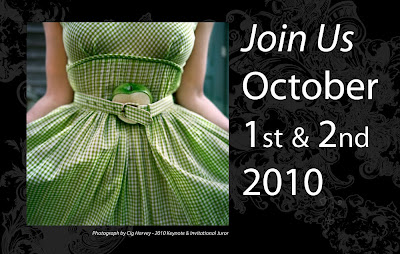 Mark your calendars:
Click646 returns to Greenwood in October

GREENWOOD, S.C. -----Renowned photographers Cig Harvey, Ann Jastrab, Melanie McWhorter and Ben Ham will share their images and ideas at the second annual Click646 photographic collective in Uptown Greenwood on Friday and Saturday, Oct. 1 and 2. The event will also feature food, music by groups including the Nouveaux Honkies, and the launch of a Scholastic Invitational Contest and Exhibit.

Click646 made its debut in 2009 with special guests Christina Mittermeier, International League of Conversation Photographers founding executive director; Keith Cardwell, a UK photographer best known for his Cuban works; and Joyce Tenneson, who has been described as "one of America's most interesting portrayers of the human character" as well as one of the ten most influential women photographers in history.

The event will open on Friday, Oct. 1, with a Taste of Greenwood, local restaurants serving food at various venues throughout Uptown. The Nouveaux Honkies, a group known for an original and energetic combination of blues, swing, country and jazz, will perform on the street and there will be live projections on buildings along Oregon and Maxwell avenues.

An exhibit of Ben Ham’s stunning, large format black and white photographs will open in jon holloway’s sundance gallery and will remain up for the month of October.  Ben works on an 8x10 wooden field camera capturing landscape images on film. A resident of Hilton Head Island, his subject matter is often the landscapes of Southeastern coasts and the Western states.

Uptown galleries will be open to the public for free from 7-10 p.m. and many will serve free desserts. Galleries at the Arts Council in the Federal Building and at The Museum will feature photographs chosen for the Scholastic Invitational exhibit. Ten colleges from across South Carolina have been invited to submit the very best work from their current students and faculty: Anderson University, Clemson University, College of Charleston, Converse College, Furman University, Greenville Technical College, Lander University, Piedmont Technical College, Winthrop University and the University of South Carolina.

“It’s our goal that in following years educators and students will use this annual event as an opportunity to gather together and create friendships and collaboration between other schools from S.C., “ said jon.

Cig Harvey and Ann Jastrab have both taught at the prestigious Maine Photographic Workshops. Cig is acclaimed photographer and professor at The Art Institute of Boston at Leslie University. Her images are in numerous collections worldwide. She recently teamed up with Maine Magazine to create a year of covers. Ann is a fine art photographer, master printer and teacher and is director of Rayko Photo Center in San Francisco.

Photographer Melanie McWhorter is a regular contributor to the online magazines Fraction and photo-eye, and maintains her own photo blog, melaniephotoblog.com. She manages the photo-eye Book Division and curates exhibitions of local photographers in the photo-eye Bookstore.

Up-to-date schedules and information about Click646 can be found at www.click646.com.

Further information about the artists is available on their websites: