In 2009, I went on a family vacation where we drove to California and en route back from that state, we decided to drive over the Hoover Dam. I was not familiar with the new bridge being constructed over the Dam and was amazed and awestruck as we drove around the bend to find this structure which would ultimately be 2,000 foot long with a 1,060 twin-rib concrete arch about two-thirds the way through construction. The structure is functional and artistic.
A few weeks later, Jamey Stillings stopped by my office. We have known each other for years as we live in the same city and, obviously, are interested and employed in the field of photography. Jamey brought a Magcloud publication that the had printed on his new project on the Hoover Dam By-Pass Bridge. Already seduced by the physical structure, I wanted to see and know more. Jamey had access that many photographers were not allowed and was dedicated to this project for years. The resulting images incorporate the vast aspects of natural environment and the will and intellect of humans to work around the physical barriers that nature puts in the way. The bridge now officially called, Mike O'Callaghan – Pat Tillman Memorial Bridge, opened October 19, 2010 and Stillings work is showing at the Springs Preserve and continues through January 23, 2011. 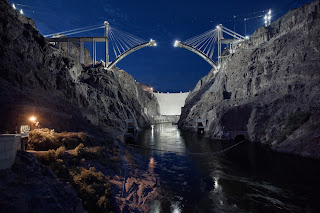 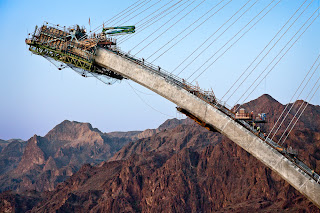 Jamey Stillings
"How a structure and its creation are documented greatly impacts how it is remembered in history. Construction of the bridge downstream from Hoover Dam is unique both for its historical importance, by its proximity to the dam, and for its technical achievement, bridging the Black Canyon over the Colorado River with the longest concrete arch span in North America. The bridge challenges us to examine the juncture of nature and technology on a scale that is both grand and human. When I first encountered the bridge at Hoover Dam in March 2009, it immediately captured my imagination. Watching the bridge's construction, especially at night, is both inspiring and magical. The photo essay, which is evolving from this initial encounter, allows me to meld photographic and aesthetic sensibilities with a reawakened sense of childhood curiosity and awe. Photographically, the bridge as subject is creatively and technically challenging, dynamic and transitory. Over the past year, I have returned to the bridge again and again. As it evolves, each visit requires fresh perspectives and visual inquiry. This opportunity to spend extended time with a single ‘subject’ has brought a depth of visual understanding both to the approach and the resulting body of work. The overarching goal of the Bridge at Hoover Dam photo project is to acknowledge the collective talents and labors of those building the bridge and to place the bridge within the historical and aesthetic context of Hoover Dam and the American West"-- Jamey Stillings
View the entire project's website.
Posted by Melanie McWhorter at 9:46 AM