I became aware of the Dutch photographer Rob Hornstra with his book 101 Billionaires, a project based in the former Soviet Union depicting the quotidian lives of the average citizen in the new capitalist economy through portraiture and text. Since making this book and the follow-up after the 2008 economic crisis, 101 Billionaires: The Crisis Edition (Down to 49), Hornstra has been working with writer Arnold van Bruggen on the The Sochi Project. The Russian resort town of Sochi will be the location of the Olympic Winter Games in 2014. For this is a donation-funded project, Hornstra and van Bruggen will continue to document this region of Russia as it prepares for the massive changes brought about with the advent of the Olympic Games. As part of this ongoing project, Hornstra and van Bruggen produced a newsprint publication/exhibition On the other side of the mountains to raise awareness and funding. Here Hornstra discusses the newsprint publication. More info The Sochi Project or to donate visit the website. 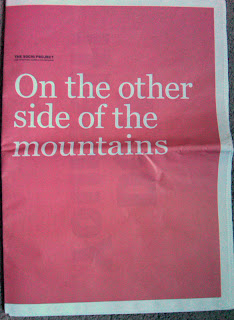 MM: Why did you, the designer, or publisher choose newsprint for The Sochi Project On the other side of the mountains?

RH: We don't work with a publisher. So we is me, the writer Arnold van Bruggen and the designers Kummer & Herrman.

This is from our sketchbook at thesochiproject.org

The production had a number of preconditions: at each location we would have use of a piece of wall, but it was unclear how much. Furthermore, 'something with the internet and projections' was expected. In addition, we wanted to give visitors something they could take away, which fits the strategy of The Sochi Project. And if possible, we also wanted to carry out guerrilla campaigns in the various festival cities. The budget for all of this was €3,000.

Based on the success of the poster exhibition in Rome and our introductory newspaper, the question arose of whether we couldn't combine all these elements in one product. And so the idea of a multi-functional newspaper-cum-Do-It-Yourself exhibition was born. A couple of quick calculations revealed that a 64-page newspaper would result in an exhibition of 1.20 x 6 metres. This, combined with an adapted, more public website, would be it.

MM: Does this choice relate to the subject matter or concept of this specific book?

RH: The choice relates to the concept and it fits the subject. But there are more media (for example a small book) which fit the subject.

I wrote before how we came to the concept.

MM: What are your thoughts on the non-archival nature of this material and how it relates to this publication?

MM: Do you think there is a modern movement that prompted this move towards affordable materials aside from economic reasons?
RH: I wouldn't call it a movement. What you see is that we (photographers, documentary makers) slowly start to move away from all traditional stuff and definitely not only because of economic reasons. We should start thinking from scratch what to do with our work over and over again. I believe an important reason for this is that right now everything is possible. The crisis in the editorial world gives photographers a lot of freedom. You don't have to think about publishers or magazine editors anymore. You can do whatever you want. Personally I never think about editorial stories anymore. Sometimes it happens that a series appears to be successful in magazines. So if everything is possible and if you don't have to think about editors or publishers or who ever, that mean that you have all the freedom in the world. Why not distribute your work via IKEA instead of DAP? You reach much more people if you distribute your work via IKEA. I am not seriously investigating this idea, but what I want to make clear is that we have to delete all our old fashioned ideas and start thinking over again from scratch. I think the self-published newspapers are only the start of many new ways of publishing in the upcoming years.

A newspaper has many of course advantages before traditional books. It is cheap, you can reach many, many people, you can give it away for free, the attitude is magnificent rough and it feels serious and so on and so on. It is a brilliant product.

By the way you also have those great free supermarket advertising newspapers which are printed on a little bit more sophisticated paper. Also very thin, but white and a little glossy. We already informed if we could use this material as well, but it starts from 100,000 copies (at least here in the Netherlands).

Posted by Melanie McWhorter at 11:32 AM

Email ThisBlogThis!Share to TwitterShare to FacebookShare to Pinterest
Labels: Newsprint

I remember David Hockney did at least one "newsprint" project - with the Bradford Telegraph I think it was? (and maybe another with the Guardian?)