A couple of years ago, Alec Soth published The Last Days of W on newsprint. I speculated, as I always do about the meaning of great book design as much as I would the meaning of a great piece of contemporary art, about what this medium meant in relation to the work. I decided that there were many reasons for printing on newsprint or lesser/lighter/non-archival papers: First is easy dissemination -- it is cheap to print and distribute; second: democratization of the medium reflecting on political pamphlets and fanzines; third: rejection of the photobook as commodity which is purchased for its expected increase in monetary value; and fourth: creation of a conceptual art piece meant not for longevity, but to deteriorate in a short span of time as a newspaper or some other timely publication would. A short time after Soth's Last Days of W, Andrew Roth released Back to Okinawa 1980/2009 with work by Keizo Kitajima under his imprint PPP Editions. Not only did I have questions about why these two publishers, and bibliophiles, would select such a low-grade and transitory paper, but many of my clients (from photo-eye) kept saying the same thing: Why would these publishers chose this paper for a "book"? Many publications followed printed on similar substrates and, thus searching answers, this article was conceived. Over the next week, I will publish the answers to a few questions posed to Alec Soth, as he started the pondering, and John Gossage, Nicholas Gottlund, Michael Mazzeo, Andrew Roth, Erik van der Weijde, and Grant Willing about this specific topic and how it relates to their decisions about their respective publications. First, Alec Soth speaks about The Last Days of W and Andrew Roth on Back to Okinawa 1980/2009. 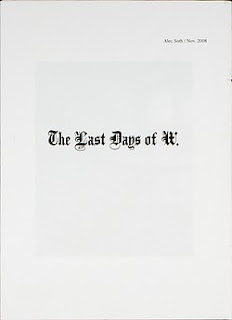 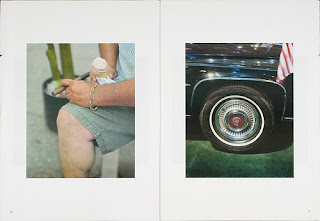 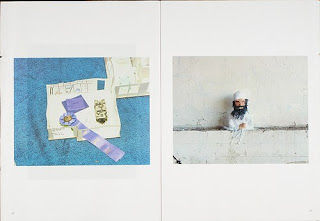 ALEC SOTH
MM: Why did you choose newsprint for The Last Days of W?
AS: This project was about the end of an era, and what better way to mark such a moment than with a medium that is itself reaching the end of an era.
MM: Do you connect this object with other related materials, contemporarily or historically-- zines, pamphlets, etc?
AS: Yes. Last Days of W wasn’t  authored in the same way. It is much more informal and disposable. It really is just a big zine.
MM: What are your thoughts on the non-archival nature of this material and how it relates to this publication?
AS: This is one of my favorite aspects to the project. Forty years from now, I want to pull out an old yellow copy and show it to my Grandkids and say, "I published this at the end of George Bush’s presidency."
MM: Do you think there is a modern movement that prompted this move towards affordable materials aside from economic reasons?
AS: Despite the decline of print, there is a huge wave of self-publishing amongst photographers right now. But many of the print-on-demand solutions simply look like poorly made books; whereas, zines and newsprint has the look and feel of intentionality. 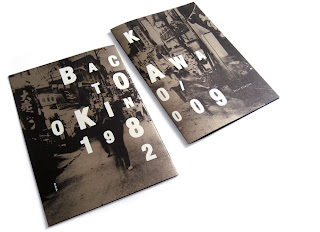 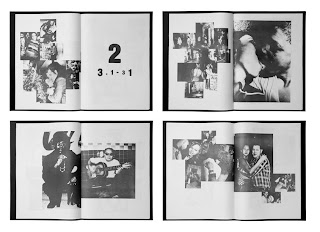 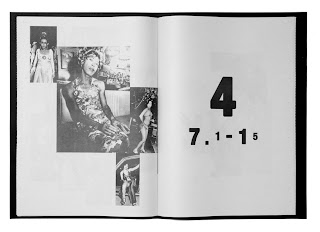 ANDREW ROTH
MM: Why did you, the designer, or publisher choose newsprint for Back to Okinawa?
AR: The book was designed to reference Another Country in New York (1974) the handmade Xerox book by Moriyama Daido. In Another Country in New York Moriyama marries funky newsprint pages printed in Xerox with a luxurious silkscreen cover.
MM: How does this choice relate to the subject matter or concept of this specific book?
AR: Back To Okinawa 1980/2009 is a new version of Keizo Kitajima’s serialized, four-volume publication Photo Express Okinawa (1980). The original self-published, serialized edition was scheduled for release every other month, over one year, though only four volumes were realized. Together these four volumes formed one work — an investigation into the nightlife in Kozu, the red-light district surrounding the Kadena Airforce Base in Okinawa. Kitajima immersed himself in the life of Okinawa’s nightclubs, bars and streets, photographing a mix of American military (chiefly African-Americans), Japanese prostitutes and drag queens. The volumes were slim zine-like publications with colorful covers and a graphically-dynamic presentation of black-and-white photographs within. Kitajima had lost the negatives for this work so we needed to scan each image from the original four volumes. Since they were printed in half-tone, the dot pattern became even more apparent after scanning them. It seemed logical not to try and make high quality reproductions from them; they would never have held up. Newsprint offset-printing seemed suitable and again, I wanted to reference Moriyama's title. Moriyama was an important early influence on Kitajima.
MM: Do you think there is a modern movement that prompted this move towards affordable materials aside from economic reasons?
AR: Traditionally newsprint or cheap non-archival paper stock was used either during economic downturns when it was hard to find anything else (or in a part of the world where there simply wasn't anything else available); by younger artists as an affordable material for zine production; or by artists referencing mass produced printed-material like flyers and newspapers (Hans-Peter Feldmann, Aleksandra Mir...). I think there is a certain nostalgia for the ephemeral, not to underestimate the appeal of an art-form which will, for certain, disintegrate. At a moment when archival concerns for everything connected with Art production and its market value (and longevity) has become so over-emphasized, newsprint has inherent anarchistic appeal.
Read more by Andrew Roth on Back to Okinawa 1980/2009 and some of his other publications on This Long Century.

Posted by Melanie McWhorter at 1:29 PM

do you know if any of the print on demand publishers offer rougher uncoated paper?