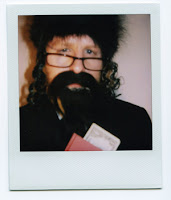 Jonathan Hollingsworth, with his imprint Just One Guy Press, is currently working on his second book Everybody I Ever Met in L.A. (image from series shown to left) due in November 2008. Here he discusses the experience of publishing the new book and his first book, What We Think Now.

MM: What made you want to self-publish?
JH: With my first book, What We Think Now (2006), I was working against a deadline which was the opening for my first solo exhibit, at the California Museum of Photography in Riverside, alongside exhibits by Alec Soth and Lise Sarfati. Having already worked a year at Twin Palms, I knew the amount of time that goes into the submission process, and subsequent process of publishing a book. This was time I didn’t have. So, given my contacts with Twin Palms’ printers, I decided to publish the book myself. In retrospect, I’m glad I did. It was a learning experience I would’ve never had without taking that gamble. 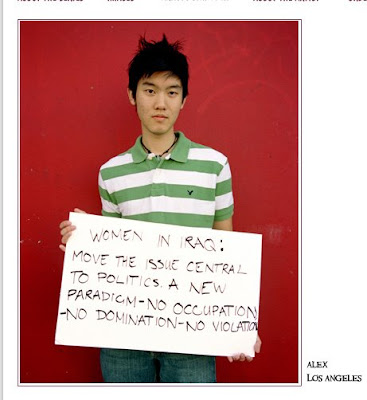 ©Jonathan Hollingsworth from What We Think Now
The downside was that I never found a distributor. I contacted a few, and we discussed the prospect of working together, but their terms would have made it difficult to recoup my investment in the print run. Ultimately this meant that I did everything myself: generated every invoice, packed every book, called the bookstores three months later when I still hadn’t been paid. Fortunately the latter wasn’t a common problem!

MM: Why did you choose to produce the books in the format you selected?
JH: Originally, I was going to print the book as a hardcover, but later decided to print softcover. The book is about young people’s take on the war, and so I wanted young people to be able to buy a copy without thinking twice, which is why I ultimately chose a format which was more economical. I was really happy with the outcome—people often comment on the quality of the printing—and while high production values are important, I was more interested in publishing a book that made a compelling statement, rather than publishing an art object too precious to be handled by the guests.

MM: Who designed and printed the catalogues? How many did you print?
JH: I designed the book myself: creative autonomy was the big perk of self-publishing. Samhwa in Seoul printed a run of 1,000, which was essentially the minimum. Two years later I have 100.

MM: How would you recommend a photographer get funding for his or her project aside from personal funds? Do limited edition prints help?
JH: I’m the last person to answer this question. In fact, I could take a lesson or two on the subject, as all my ventures have been personally funded. The execs at Bank of America send me postcards from Jackson Hole, Hawaii and Iceland . . . I’m going to be offering a limited edition for Everybody I Ever Met in L.A., so we’ll see . . . ©Jonathan Hollingsworth from Everybody I Ever Met in L.A.

MM: Who is your favorite photographer or one who has impacted your life and work?
JH: Duane Michals was an early hero. His use of text and image was a big influence, and judging from my work today, still is. Three days after I started working at Twin Palms, Duane showed up to start working on his latest book with us, The Adventures of Constantine Cavafy. He and I sat side-by-side in front of my computer, all day for a couple of days. The heart-in-the-throat deference lasted five minutes. He insulted the shirt I was wearing, so of course I had to point out his choice of pink socks.

MM: In your personal work, are you influenced by other mediums other than photography?
JH: Of course. I think I’m influenced by everything, so it’s hard to list all of my influences, diplomatically.

MM: What blogs do you read? Magazines?
JH: No blogs, except, um, yours. The New Yorker comes to my house once a week and I look at the cover, and toss it onto a stack on my shelf, and then feel very anxious about the growing tower. When I have the time, I read fiction mostly. I studied English literature in college, so it’s a habit I still haven’t kicked.

MM: What is your favorite book, photo or otherwise?
JH: My favorite is always the latest. Right now I’m reading The End of Alice by A.M. Homes, about an incarcerated pedophile and his correspondence with a 19-year-old paramour, home from college for the summer. And I just saw Chris and Don, the documentary about Christopher Isherwood and Don Bachardy, which gave me hope that I might not spend the rest of my life with a pug named Gladys. If I had a pug named Gladys . . .

MM: Do you have an odd or funny photography related story?
JH: Two weeks ago I went down to Memphis to meet with William Eggleston for the signing of the remaining 1st editions of 5x7. It was a really hot, humid day, and I was hard at work opening towers of boxes and pulling out stacks of books, and he, very hospitably asked if I wanted some water, 4,000 year old spring water, he specified. Of course I did, but ironically, it was served in a tiny Dixie cup, the sort you might get at the dentist. Later, he dropped an Alka-Seltzer tablet in his cup of water, and casually sipped, as though it might have been an espresso, between signing books.

MM: Do you like man boobs?
JH: Only on myself.

Posted by Melanie McWhorter at 9:18 PM