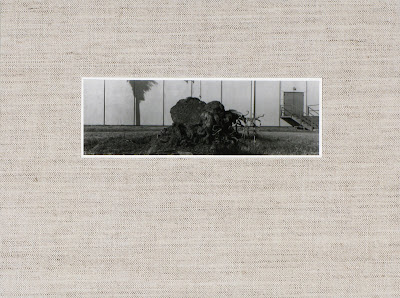 All images this entry © Mehdi Saghafi
The third interview in the small publisher series is with Mehdi Saghafi. Saghafi published his limited edition book on Treasure Island this year. Here is what he had to say about the project.

MM: Why did you choose to photograph on Treasure Island?
MS: Treasure Inland was my first photography project in 10 years and my first medium/large format work. I was shooting social landscape/documentary images with a Leica rangefinder for most of photography career. I wanted to do test the water for doing photography again and wanted to do something using a panoramic camera. I rented a Linhof and on the way back to San Francisco to return it, I decided to check out Treasure Island. In my early days, I visited many of the military bases in the area as a visitor and took photographs in their museums of military displays, and thought it might be interesting to see Treasure Island after it had been decommissioned and given back to the City of San Francisco.
Unfortunately, I did not get any interesting images from the initial visit; they looked like generic photo-essay. About that time I had purchased a Koudelka book from photo-eye on Wales (titled Reconnaissance Wales). This book had about 16 plates and I thought here is an idea--do 20 images on Treasure Island. If I could complete an interesting project, then I would buy a Linhof and do photography again. So choosing Treasure Island was more like a class/work assignment than a personal choice.

MM: Can you give a brief history on this location?
MS: Here is what I wrote in the book about the location: “In 1935, the shoals north of Yerba Buena Island were chosen as the sight for the International Expo World Fair. To build the 403 acre island, 29 million cubic yards of sand and gravel were brought from the bay and Sacramento Delta area. Because the fill contained washed out dirt from the gold mining days of the Sierras, the island was named Treasure Island. Once construction was completed, Treasure Island hosted the fair in 1939 and 1940. But in 1941, the military rented it from the city of San Francisco to serve as a military base for the war. In 1993, it was closed and given back to the city.”

MM: How long did you work on the project before you decided to self-publish?
MS: I gave myself six months to do the project. It took about two months and three visits and something like 50 rolls of film to get a sense of the place and direction for the project. I had about four images by then and they are all in the first half of the book. By the time I stopped, I had visited it over ten times and had a box full of negatives. I edited down to 26 images.
I did not have my darkroom then, so I scanned the images and printed them on Epson using carbon pigment ink. Within two months after the project I finalized the order of images with help from my friend Alex Azam. I printed them on inkjet, folded and glued the final plates and took three sets to a local bookbindery. I had my book.
The decision to publish came a few years later. When I was aspiring young photographer, my dream was to have a book by the age of 40 (I did the project when I was 40). Soon after Treasure Island, I started on my best project yet on the Sacramento Delta. After 2 years on the delta project, I looked at the Treasure Island book and still liked it and thought it had substance, so I decided to get it published.

MM: What made you want to self-publish?
MS: Not being a good hustler and knowing how I wanted the book, I decided to self publish. I take care of my kids in the day and work in the evenings, so I do not have much time for photography let alone marketing, making connections and talking to publishers. I gave myself a budget of $10000 for 500 books and set out to do it. Between the time I decided to self-publish and finding the right printer for the price, it took over 7 months and my budget was not correct.

MM: Who designed and printed the catalogues? How many did you print? How about the limited edition?
MS: I did all the pre-press work myself. My friend Alex suggested the font. I bought an Epson 750 scanner, liquid mounted all the negatives and scanned them. I made the tritones in the Photoshop and used InDesign to do the layout. We ran the press for about a 1000 copies and I had them cut and fold for 500 books. The Paper, Mohawk egg shell, was almost as much as the press run price!! The rest of the cut plates were not folded and 26of them where used to make the limited edition. I saved about 100 of each plate unfolded to use as posters and promotional materials.
MM: Why did you decide to do 26 different prints with the limited edition?
MS: I had seen a copy of Black Triangle (by Josef Koudelka) as loose plates and I really liked it. To see plates unfolded was as close as looking at the real panoramic image, so that decided the format for the limited edition (LE). Then I needed to choose the print for the limited edition. I thought why not make each one unique and allow the collector to have what they like. I guess I could have let the print choice open and see which image was most popular with the viewers, but I decided to make them all unique.
MM: How would you recommend a photographer get funding for his or her project aside from personal funds? Do limited edition prints help?
MS: I used personal funds, so I would not know. The limited editions help unless you do all the work and make the boxes or keep the materials very simple. For me, it was important to make the limited edition presentation the best it could be. Now, if you are well-known your gallery may pay for it all and you can charge few thousands and actually pocket some money. But most self-published books that I have bought are labor of love, expensive to make and sell and have been very nice.


MM: Who is your favorite photographer or one who has impacted your life and work?
MS: It has changed with time. When I started, I fell asleep to a W. Eugene Smith catalog of his complete work from Center for Creative Photography, followed by books by Robert Frank and Walker Evans and later, Gilles Peress, Josef Sudek, and Josef Koudelka. I like Smith passion. Minamata is by far my favorite work by him. He summed up all his years in that book. Frank opened a window for me, teaching me not be bound to the “perfect print or composition”. I was inspired by Sudek for his love of beauty in the ordinary; Koudelka, the panorama; and Gilles Peress, love of humanity. Peress’s last two books are the hardest books for me to look at and they make me cry every time.

MM: In your personal work, are you influenced by other mediums other than photography?
MS: Yes. Literature and poetry are a big source of inspiration for me. Being from Iran, I am more attracted to the eastern poetry and darker literature. I believe there is always hope and as dark as some of my images maybe, they are not hopeless.

MM: What blogs do you read? Magazines?
MS: I have not been doing any of this in the past 5 years. I subscribed to Lenswork and Aperture for a short while, but they got stale. I liked Afterimage newsletters while Bruno was the editor but they were struggling and do not know if they are still around or not. I like photo-eye newsletter a lot. I get to see new photographers and books weekly and that takes care of my fix.

MM: What is your favorite book, photo or otherwise?
MS: If there was a fire and had to save 3 books, it would be my Treasure Island, Black Triangle, The Silence.

MM: Do you collect photo books? Did some of the books influence your decision to publish the book in the panoramic format without the gutter?
MS: Yes. I have descent collection. With the exception of self-published and panoramic books, I only buy what I really like. I buy self-published and panorama books because they are unique. Koudelka’s Reconnaissance Wales influenced me to print my books in this same format. I saw is first there, but instead of cardboard cover, I used cloth with the original silver print embossed in it.

MM: Do you have an odd or funny photography related story?
MS: The price of the binding of Treasure Island had jumped to $20 a book by the time I was ready and had it sorted. I could not afford to bind it all anymore, so I decided to bind only 200. So I had to produce 200 Images, so a friend and I worked for about 8 hours and when I went to hang them to dry, I had a photo installation.

After all is said and done, I think doing a book was a great thing. It was frustrating and tight due to money, but if you wanted your own book today it is much easier than ever before. If you are doing a more traditional book, it will be much cheaper for perfect binding. Since all pages in Treasure Island had to be glued together individually, it was labor intensive and expensive.

Mehdi Saghafi is happy to answer any questions. He can be contacted at msandcdg@sbcglobal.net.
Posted by Melanie McWhorter at 12:43 PM